Little Mole first appeared in a cartoon in 1956 purely by accident. Zdeněk Miler was thinking about a suitable, as yet undiscovered animal hero for a story about the making of a linen shirt and while out for walk tripped over a molehill... The first film, “Jak krtek ke kalhotkám přišel” (“How the Mole Got His Trousers”), was a huge success, winning the main Golden Lion price at the Venice Film Festival. Over the course of 40 years more than 50 animated films have appeared with Little Mole in the leading role. Little Mole Krtek never sulks, is always helpful and friendly, and is easy to understand without words, all of which have made him popular around the world. In May 2011 he even went into space with the American astronaut Andrew Feustel on the space shuttle Endeavour. Little Mole is the hero of more than 60 books published in many reissues, and his stories have been translated into 30 languages. He has sold millions of books and films – more than two million in the Czech Republic alone.

The Little mole has been known for 50 years in more than 80 countries. More than 50 short films have been made, and more than 60 books in many editions have been published. The Little Mole is not only known around the world but also in space. 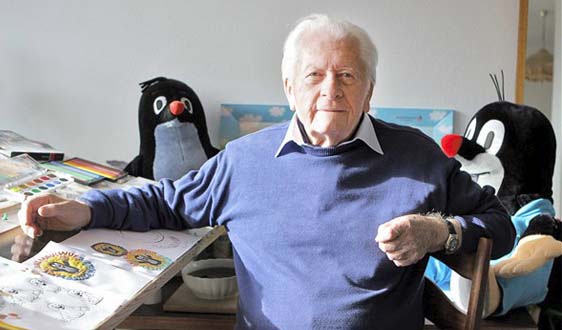 Zdeněk Miler, a major Czech artist, director and designer of animated films for children,  was born to the family of a clerk in Kladno. From his youth, he was surrounded by art and exhibited artistic talent. In 1937, he was admitted to the School of Applied Arts in Prague. In 1942, he began working for the Zlín Film Studios, and three years later for Krátký film – Bratři v triku. In 1956, the Little Mole character was born, and it soon became famous, both in Czechoslovakia and abroad. Zdeněk Miler received many international film awards; in 2006, he was awarded the Medal of Merit, First Class.